The other day I had what I’m now thinking of as an “Old Man Moment”. I was setting up a shot and I was walking around with my old beloved Minolta AutoMeter IVF getting readings. The subject of my photos was a bit of a photographer himself and while I was working he and I were talking about photo stuff. So he says to me “What’s that thing you are using?”, meaning my hand held light meter which I was using to dial in my strobes. I explained what it was and what it did. He seemed confused. “Doesn’t your camera figure that out for you?”

That baffled me for a sec. I explained that the camera can’t control the output or placement of my studio strobes and thus I have to set everything manually. He replied that it’s silly that with all the technology we have the camera can’t automatically set the lights. Well with lovely things like the Nikon CLS system it can but with a fair amount of limitations and since I was using 5 lights for the shoot the camera can’t handle all the calculations. Yet.

Then that reminded me of a shoot a few months ago where I was shooting an event and was next to another professional shooter whereby I was close enough to hear: Click! “Mmm, dark.” Click! “Still dark.” Click! “Still too dark.” I mentioned something like “Why don’t you just get a meter reading?” The response knocked me to my knees, “Naah! I’ll just change my exposures till it looks good on the screen.” Turns out the photog only shoots in Aperture Priority and will fiddle with the exposure compensation for a while until the exposure gets right. Holy wasted time Batman!

So it seems that because I own and actually use a hand held light/flash meter I am a bit of an oddity. And because I learned how to use a spot meter, that wonderful tool that is in just about every camera priced above $500, I am also a master of the arcane arts. Ok I understand that yes I learned to shoot on film and before the era of the intelligent multi segment meters which we take for granted. And yes I learned how to judge the reflective values of objects so that a spot meter can be used to determine not only exposure but also to figure out the range of brightness within the scene to be able to figure out how to process the image to make the best looking print/file because I learned the Zone System that Ansel Adams developed.

I guess that I’ve also taken something for granted: me. I am used to my working method and because of it I am an automated photographer and don’t use automated systems except for TTL flash in some situations and AF in poor light. The rest is up to me. I really only use my LCD screen to check my moments/compositions rather than exposure. In this way I can spend more time looking through my lens than at the back of my camera.

Case in point: I was shooting at a night club a while ago and the interplay of people, light and color was pretty interesting. I saw this couple and they were playing with his cell phone. I liked the way their faces were lit by the screen so I got a quick meter reading off his face with my spot meter and shot away. No lost time or lost frames because I botched the exposure a few times to dial it in. Huzzah! 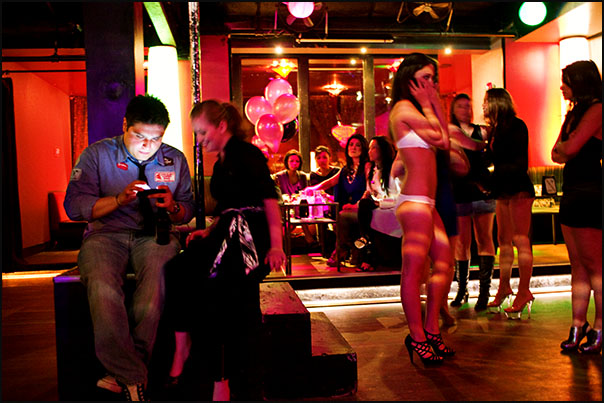 One thought on “Spot on”