Sorry for the delays in posting. The last few months have been a long blur of often fun and occasionally well paying but more technical than artistic jobs. Not a lot of down time which is kinda how I like it. It’s not the sorta life that most would want. Don’t get me wrong, I dig it but it would be hell for most. When people think about becoming any kind of professional creative they think about the fun, maybe glamour and certainly all the great opportunity to live a live of expression with the bonus of getting paid to do so. Yep, that’s pretty cool.

On Saturday afternoon I did one of the last couples interviews for the Denver In Color project that is coming to a close and it was a good one. I felt pretty good in that we got a super cool gay couple who in many way reminded me of the balanced and cooperative relationship that I have with my wife Angela. Was cool. So I came home and proposed taking us out. Shes a writer, as I’ve mentioned before, and had been hard at work writing all day so my plan was perfect: get some ribs from our favorite BBQ joint and take them to one of our favorite local breweries to chill out for the evening.

Fast forward and we are there having a great time tucking into some seriously good food washed with a lovely pint, just my gurl and me. Ahh! Just minutes after dinner I start feeling like I ate too much. It’s easy to do with stuff that good. But ten minutes later on the way home I start honestly feeling ill of the “Gosh I hope I don’t barf in the car” sort of way that really ruins a great day not to mention a date night out with the lady.

Wind the clock forward about a hour and a half and yepper! I’m sick as a dog. I’ll spare you the details but the term “projectile” is often used. And in this case was used for hours on end. Not good. No sleep that night; alternating between shivering and puking . I wake up Sunday afternoon feeling like I’ve gone three rounds with young Mike Tyson. Body barely works, my mind in a haze, can’t eat anything, dehydrated as heck. Aw-ful. I slept a bit but mostly just sat on the couch in a daze. The wife did her Google magic and finds that I caught the Norovirus which is that nasty thing which wipes through all the people on cruise ships that we’ve read about on the news before. Joy! Said that I would be out of commission for 3-4 days easily.

I’ve got two shoots on Monday and neither can be rescheduled as they are right on the publishers deadline. Argh.

So what happens? Monday morning I get up automatically at 6am as I always do, get a cuppa joe and go to work after not having eaten in essentially two days. I was maybe 70% functional. However I was only partially dead and that’s more that I need to get things done. Why? I’m a professional and people are relying on me. Not just to show up but to do my job as well as on my best day. No second chances, no excuses.

This “wisdom” was the first thing that I told to my new intern Chrissy when I picked her up Monday morning to assist me the first time. (Say “Hi” Chrissy, they are all looking at you …) I explained my weekend and said “… so this is the life. This is what it takes”. With that we were off and running. Ended up being a really fine day. The photos were good, the clients happy and all crises were avoided.  Moral of the story, Never Say Die! BTW Chrissy is a total champ so expect to hear more about her in future episodes.

Here is the ab-fab Chrissy and I standing in for our subject the owners of the Grimm Brothers Brewhouse shoot that we did. Amazing beer! (For new readers, she’s the cute one) 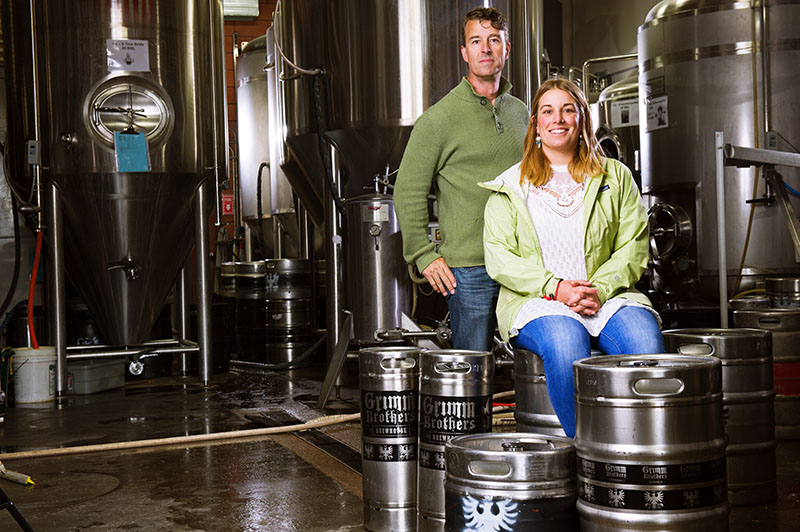