Stick it out and turn it around

I will unabashedly admit that I like for my images to in some way feel like you/I are “right there”. Personal. Intimate. Up close. A sort of sit on my lap and let me tell you a secret kind of thing when ever possible. It’s not always an option and in many ways for good reason. I’d love to see football shot from the perspective of the players: to mount remote controlled cameras into the lineman/wide receiver’s helmets would be amazing but they would never let you do that. But a boy can dream right? And dream I do. I love remote cameras for getting a perspective that you just can’t get when the camera has to be attached to your face. Then again not everything lends itself to that either because the logistics of camera placement would be either insane or would just be a lot of work to get possibly one frame that is interesting. Or worse after all that work of getting there early and setting up the remote you get nothing usable or interesting at all. But between having my camera attached to my head and triggered by radio when it’s “way over there” there is a middle ground: the camera on a stick.

Much like many other things: hotdog on a stick, cheesecake on a stick, and my fave: taco on a stick, camera on a stick is loads of fun. Ok the taco thing is something I made up but if it’s true I’ll have three please. Where was I? Oh yeah, thanks Stanley. By “camera on a stick” I don’t mean deep fried and slathered with mustard but rather the camera on the end of a monopod that is used to get the lens into a position that you really can’t reach. I first started doing this a number of years ago when I was covering a swim meet and was bored with the silly “consolation finals” and was waiting for the real events. I thought to myself “Self! I wish that the action wasn’t happening  below my feet. The tops of their wet heads isn’t that interesting.” So on an attention deficit whim I put my camera equipped with a wide lens on my monopod, attached a cable release and turned the whole thing upside down so that I could stick the lens down to water/face level and take shots that way. It worked! Yeah the camera got pretty wet but no matter, I had something new to play with.

I found that with the camera upside down and held lightly with a few fingers to act as a pivoting gimble I could walk along the pool and the camera would stay rather steady, like those SteadyCam deals the video guys use, so that I could easily match the swimmers speed and use a slow shutter speed to get all artsy with watery motion blur. She-zam!

The problem with that technique is that it really only works with the swimmers at the edge of the pool and they are the slowest ones in the heat so my artsy shots never ran because my photos were never of the winners. A pity. But it was a useful lesson. Put the camera just a bit out of my reach and sometimes it’s enough to give me an angle that I don’t normally see.

Hit the fast forward button a few times and we are in the current era. I was covering the Muddy Buddy event for my agency and though that it be a good time to use the old camera on a stick method. Ya see the Muddy is an event that travels around the country with multiple stops and the deal is that two people form a team where they have to traverse a series of obstacles. But one “buddy” runs while the other is on a bicycle and they switch after each challenge ending in a crawl through a mud pit. Fun! But the big finish is again happening at ankle level. Thus the camera on a stick approach.

So after I shot a bunch of stuff from the rest of the event I headed to the mud pit equipped with a camera, wide lens, cable release, monopod and an extra trick: the Bogen angle head which only goes flip-flop in one axis unlike a regular tripod head which also swivels. With this little deal-y on the end of my monopod I could adjust the angle so that when I used my monopod as a 4 foot boom arm the camera was level. Yeah! Thus I was able to get the low angle shots that made the other photogs covering the event scratch their heads with a “Huh, that’s a cool approach!” look. Because since there was a berm around the pit you couldn’t get the low angle without being directly in the mud and once you were in it you couldn’t move about easily. Thus everyone else was shooting from a crouched position and long lens but I was able to get the participants view on things. 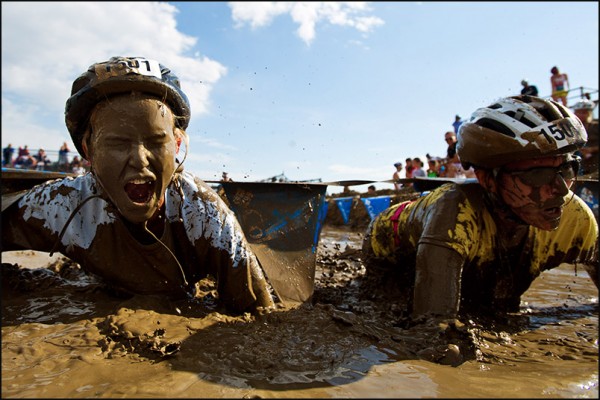 One thought on “Stick it out and turn it around”