The other day I heard that an artist’s style is what you do all the time as well as what you don’t do often. These are usually the product of how you learned your craft; often due to the slavish following of a teacher/schools method or ones singular devotion to and the intentional imitation of an artistic idol. Some develop style intentionally and others stumble upon it. In my case it’s a product of some influences that you might guess and others not.

For instance I realized that my largest influence upon what I choose to photograph and how isn’t related to any artist in existence. It is not because of a teacher since I didn’t have one. It’s because of the fact that I never planned on becoming a photographer or any other sort of professional artist. Nope. I was going to be a scientist. First going into physics, then bio chemistry then eventually going to have a psychology major and a philosophy minor before realizing that I was going to make my living doing something that didn’t require a college degree to give me the gateway to my career.

Ya see, an artist is largely interested in their personal experience. How something makes them feel or think. It motivates them to communicate things through their media that are highly personal in a very public way. Each work that an artist does is saying “This is important to me. Pay attention!”

A scientist is largely interested in the word that is outside themselves and often in a world that is beyond what they could personally define as experience-able. The extremely small word within cells, the vastness of space, the hidden workings of the universe, that sort of stuff. Scientists want to know why and how. They devote their lives to making sense of things that didn’t make sense before. They say “This is real and I can prove it”.

They are both after truth: one is their subjective truth and the other an objective truth. So as a result I often am asking myself “why is it that way?” before I ask “how is it that way for someone?”. Not that I’m a an overly logical dude.

My wife once told me that I am the blend of the Star Trek characters Worf, the passionate Klingon, and Data, the inquisitive android. That really thrilled me. As Lyle Lovett’s song says “Nobody knows me … like my baby …”

Back on point: I tend to start projects with my logical self and then tell that human calculator to go take a hike and I then let my inner six year old run loose. I often tell people that when I’m making photos that I try not to think that the brain gets in the way. And it does. When I don’t need it. But when I do need that brain he’s there to figure it all out and then go away so that my kid can continue to wander around giddy at how neat-o the world is.

When I was on assignment to do images for a story about a company that does super rigorous testing of electronics and was shown their room that is a total RF-proof cage to test radio antennas. My scientist brain was fascinated by the idea of it. But what to do? It was just a big white room with all these radio wave absorbing tiles. Then it hit me: radio waves are ripples of energy and that means that they are a form of pattern wherein the subtle changes in the pattern produces the signal that we can use to transmit information. “Hey kid … patterns!” 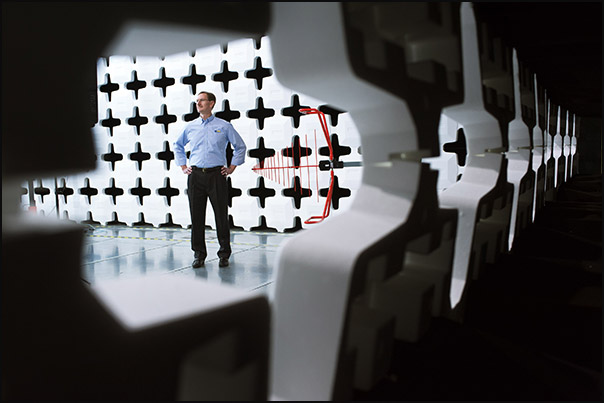