As I’ve been doing more and more video work with my dandy, nay amazing, Nikon D800 I’ve been finding that being an old timer is actually quite a benefit. That’s because I know how to manually focus a lens. Wha? Yeah! No kiddin. I fully admit that I use AF alot as, well, it works. I learned a number of years ago that especially in a sports type situation that ever since the Nikon F5 and N90s came out that the technology was besting our hand/eye coordination. I at that time would have no issue with flipping on the “auto-frikas”, as I call it, and often marvel at how in focus my pictures would be. Up till that time one of the things that truly defined a professional was focusing ability. It was a hard earned skill believe me.

I remember when I got my first 300mm f/2.8 lens. I sat by the side of the road and would spend hours focusing on the cars that drove past me cursing like a drunken sailor trying to keep the license plates in focus. It is SO hard to do. But if I was going to use that thing for sports and I couldn’t keep a wide receiver in focus why bother even having that big chunk of glass if I didn’t have sharp photos let alone the important diving catch into the endzone that won the game? Practice, practice … ugh!

Well when the F5 and EOS-1 came about the era of having to endlessly practice your focus with long lenses went out the door. The technology make it not only easy but standard place. From that time on it was not considered to be a crutch but normal to use autofocus. As a result so many photographers simply use AF constantly: no need to spin that little ring on the lens at all. Well, almost …

Ya see, the autofocus on DSLR’s in video mode is even worse than the first AF SLR cameras of the early 1980’s. So much so that you have essentially no choice but to manually focus. Here’s where being a dude from the film era is another benefit: I can focus that lens pretty well, thanks. The problem is that many AF lenses aren’t really set up for manual focus. The feel of the ring or even it’s design/placement is more of an afterthought to the manufacturer because, well, it’s an AUTO focus lens.

So I went shopping. Or as I say to my wife “Bless me for I have E-Bay-ed”. I got some dandy old Nikon AI-S lenses: a 28mm f/2.8, a 50mm f/2.0,  and the tiny 85mm f/2.0 the youngest of which, the 28mm was built in August of 1981. They are all in pristine condition, are super sharp and focus like butter. When put on my D800 and new steadycam rig it makes for an easy to move, focus and shoot rig for much of my video needs. Considering how tiny they all are, 52mm filter, they are also great for general work especially if I have to,  say, hike two miles to get to my photo destination. I’m calling them “The Three Amigos”. Yep, I’m a silly person. 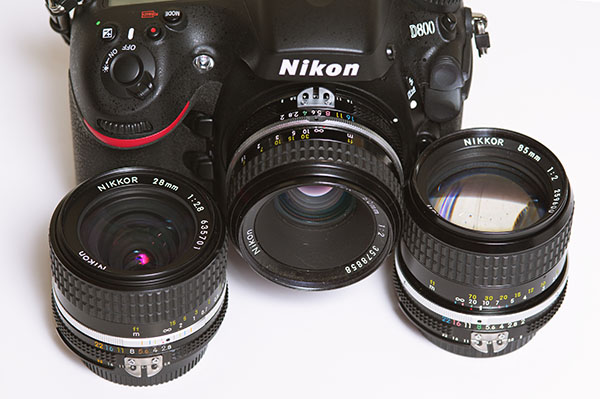