… it’s magic! Seriously. Ok to make sense of this it’s confession time: I am a multitasker in a major way. I have two monitors and the secondary one is where I put my tool bars and such when I’m editing photos or video so that I can have my bigger main monitor dedicated to my image workspace. However over on the second screen I often have the news, YouTube videos or when I find something cool a tutorial/webinar going on. I don’t need 100% of my brain working to edit photos, work on promos or send out invoices. Thus I use my ability to process multiple streams of information to my benefit/need for information. It works for me and it freaks my wife totally out that I can do this. She needs total silence when she writes.

I was listening to a webinar the other day from a highly successful commercial photographer and he kept saying two things that really stood out. 1) I’m not so much a photographer but an illusionist, and 2) sell the fake!. This is because like so much of commercial photography his work is based on composites rather than single “straight” images. Not that there is anything wrong with this practice; it’s just not what I do. Nor is there anything wrong with the photographer that I was listening to. He’s very good at what he does and is an inspiration to many. Heck, I have one of his books of portraits! More like what he does is the opposite of what I do.

I don’t want to fool people into believing that some amazing image is real that really isn’t. That’s why I don’t do fashion or glamour photography: I like imperfections in people as it’s what gives them character and frankly I dig character. What I want to do is show people amazing things that are totally real only they didn’t get a chance to see it until I revealed it to them. No slight of hand, no mirrors. Just letting them see the magic that is hidden in the mundane.

The other day I was out with my friend Dan the architecture shooter and I grabbed this frame: 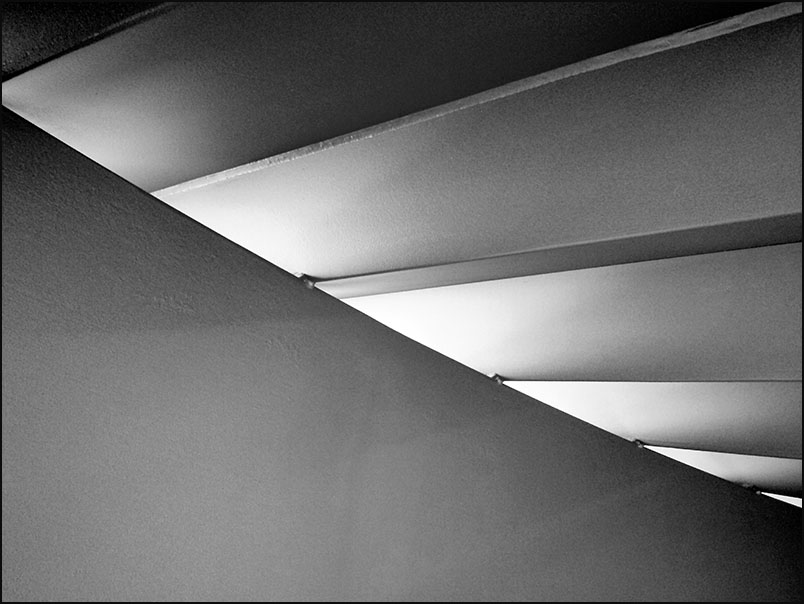 I showed it to him and he said “Wow! Where did you find that?” I pointed to the staircase that we were standing next to. I loved that he sees buildings and space with his wide angle “all seeing eye” perspective and I do the same but with my pseudo-macro funky details view.  That’s my job: give perspective to the dazzling but hidden things that surrounds us. That is, to me, an more interesting trick than to make up something and convince people that’s its real.