How a $6 cord made my life a lot easier

One of my good clients contacted me a while ago about doing a fairly significant bit of work for them that would take place over three days. Everything was spot on: perfect access, total organization, great client, interesting assignment, oh and the money was nice too! So I was putting everything together and then about less than a week before the assignment date I was asked if it would be possible to be able to get images to them directly after I shot them. Now by directly, I don’t mean next day or even at the end of the day as they were talking about within five minutes or so of my pressing the shutter button because the client wanted to be able to post updated on what was happening as it was happening. Now in a studio shoot or something controlled where I could say shoot tethered to a computer and have an assistant take charge of the incoming images and quickly process/transmit that wouldn’t be a problem. In this case it was a huge issue becasue I was going to be basically constantly shooting and constantly on the move for three straight days with nearly no breaks except to grab a quick bit of lunch. Really. What to do?

Normally I’d just throw my laptop into my backpack and haul that around until I needed to stop shooting and transmit. Nothing new here as we news guys have been doing this for a decade. Woa, that makes me feel extra old! But the problem is that I was on the run and couldn’t really have my laptop running constantly for 8+ hours in my backpack so that I could pop in a card to my card reader, open the image in P-Shop and ftp it to the client every time they tell me to send this or that image. There had to be another solution.

This little guy has been around for a while but nobody seems to have paid any attention to it except for the hardware developer types. What it does is internally change a USB client port into a USB host port. This lets dumb usb ports on things like your smartphone or tablet read devices like external drives and in my important case – Compact Flash card readers. Ta-DA! Thus I quickly got a USB-OTG, which stands for On-The-Go, plugged it into my trusty Galaxy SII phone and she-zam! I could access all my images without having to bother with my laptop. The big Huzzah! here is that there are some solutions for reading camera files out there but unless you are using a camera that saves to an SD card you are out of luck. There has been the camera connector for the iPad for a while but that only works for, you got it, SD, cards. If you are using a professional camera you are using Compact Flash and as a result those connectors are useless. You need an OTG cable so that you can plug your CF card reader directly to your phone/tablet.

Now what I did was shoot RAW/Jpg and then just ftp the Jpg files that I needed, saving the RAW for later processing where they get the full treatment. But for the client’s need of “I have to post updates pronto!” the straight from the camera Jpg works dandy.

I have been looking for some such solution to his problem for a few years and until now have had no luck. Now I will be taking a card reader and my $6 OTG cable with me on all news assignments just in case. And as luck would have it I was saved by this little wonder just the other day: I was driving to an assignment and got the call that the images I was about to shoot was being bumped to the earlier issue and they needed the images not next week but today. Did I mention that it was an afternoon shoot and I was 2 hours away from my computer? No prob! Shot it RAW/Jpg and sent the editor files straight from my card to his delight.

Tech tip: I’m not sure about this but I seems that if your device is charged throught the USB port the OTG will work as is, just plug your card into the reader and then the reader/OTG cable into the device and it will be seen and powered by the device without issue. As I said it works perfectly on my Galaxy SII phone. However it will not work as is on my Acer A100 tablet. It sees the USB Mass Storage Device but can’t power it. Makes sense as the A100 is charged by a separate power supply. If you have such a device you can get a splitter cable that with an external battery will power that silly USB port. So there ya are, a new, cheap and easy way to access your camera files without a full computer or expensive accessory. 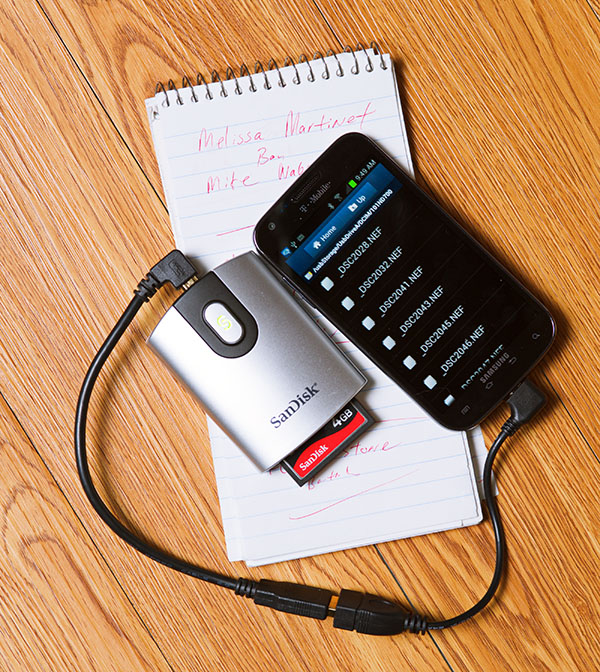