Gawd! I hate name tags. If I am in a situation where I expected to wear a name tag it seems to me that the organizers believe that I and my fellow attendees are not capable of  introducing myself or to have the person that I’m talking to do the same. The stupid ones that come in the package at your local office supply store are the worst and you know the ones that I’m speaking of. I try to be a real sport about it though. So in my usually jaunty manner tend to do things like walk up to someone that I haven’t met and because I’ve looked at their silly name tag I can say “So David Chan, assistant director of product development at CircleSquare.com, what do you think of the stuffed mushrooms they are serving?”

It certainly breaks the ice.

A wholly different situation is where I am expected to wear some kind of ID/credential while I am doing my work. I hate this even more than the “My name is …” tags because it means that I am being watched. I had to jump through some hoop to get in the door, so to speak, and I know that as I wander about doing my job it is not enough that I was scrutinized to get in but my ID is singling me out and everyone in an official capacity is paying more attention to me, who was checked out before hand, than the hundreds of other people who didn’t go through the credentialing process. And yet I am the one that they keep an eye on. Wha?

Ok, as I’ve said I can play along. I in fact have kept some of my ID/credential/name tags over the years just for a “memory box” sort of reason. I find them interesting as some are well designed and some have all the thought put into them of “Hello …” 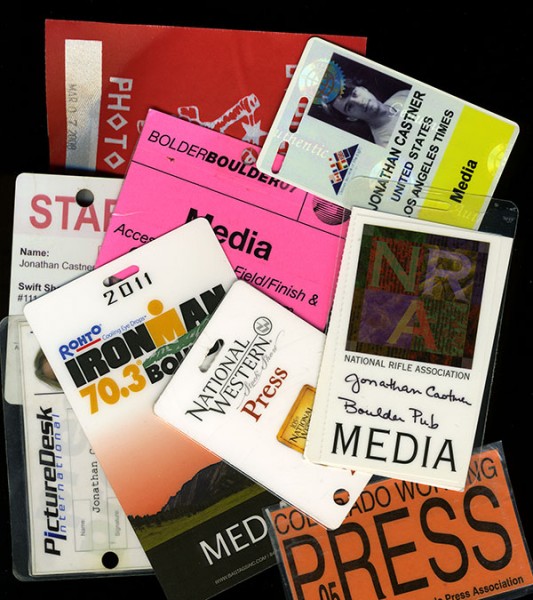 It reminds me of long time ago when I was assigned to get photos of President Clinton who was on a speaking tour after he left office. To get credentialed I had to go through a full FBI background check, no joke, was told to arrive an hour before doors opened and the other media and myself were escorted to a roped off platform about 75 feet away from the podium where Clinton was going to be and we were under, again no joke, armed guard. We had all our gear and persons inspected by the secret service and we had four of those steely suited but obviously armed dudes watching us the whole time. Then we wait for an hour. At that time the doors open and about 650 citizens flood into the hall and stand mere feet from Clinton while he gives his speech. Then after the speech he steps off the podium and walks among the crowd shaking hands and getting his photo made by hundreds of folks. Meanwhile we were told to pack up and were funneled out of the building because WE were a security risk. I bet all those folks shaking Clinton’s hand didn’t have to submit to an FBI background check. Bah!

BTW, it was that episode that made me feel good that I have always kept my politics in a small and tightly locked box that I only bring out when I am among close friends and family. I don’t sign petitions, make donations or spread my beliefs around our easily tracked digital world because I don’t want my personal life to one day be misconstrued by some lackey who is doing the credentialing/vetting and kill my access to my subject.

Back to the main story here: so a while ago I was at an event where they wanted me to wear a name tag.  An interesting aspect of this event was that it was being done in conjunction with the Girl Scouts and there were a bucket full of the little ladies on sight. I walked over to a group of them and asked who was the best artist there. After a brief conversation one girl came up as tops. I asked her to decorate my name tag in any way that she saw fit; to make it her personal art project. She grabbed a few pens and got to work. Her masterpiece complete I affixed it to my shirt and felt like the belle of the ball. If I have to announce my self before I open my mouth this certainly says quite a bit about me. Ya think? 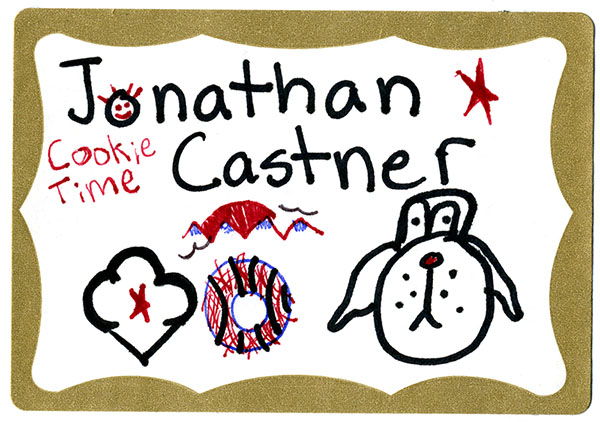