So I’m continuing to work on my project “After Action Review”: a portrait series of extreme and endurance athletes after they have spent a goodly amount of time and effort wearing themselves out in competition. I’m very excited and happy with this as I’ve put the restriction on the project that all the athletes that I photograph be amateurs: they are doing it for the love and not the money. Which makes you wonder even more strongly “the why the heck do they do that to their selves?”

So I called up a local promoter of Mixed Martial Arts events and asked if I could make photos. He swung the doors wide and gave me full access. What a guy! It’s amazing what a camera and a press pass can do for you. You get to go through the doors that say “No admittance” and “Authorized Personnel Only”. Lawd but I love my job!

I’ve shot boxing before but never MMA although I’m a big fan. I decided to shoot some action for me and my agency but the real reason that I was there was to shoot the fighters. I have deep and intense respect for the men and women who devote their lives to becoming competitive fighters – especially MMA as it’s so complex and technical.

So I head to the part of the building that they are using for locker room/pre fight prep and in the corner set up my white seamless and lights. I’d prefer to use soft natural light but in this situation I had to use strobes. One nice benefit is that none of the fighters had met me before so the studio setup made me nicely conspicuous and that lead to some curious fighters wanting to know what I was up to. The gear helped break the ice because I didn’t want to be too up front initially.

If you aren’t familiar with what goes on behind the curtain at a fight it’s like this: each fighter and their trainer spend just about every moment getting physically and mentally ready. Except for the WHAP! of gloves hitting a practice pad or the THUNK! of a fighter working on their throws and pins on the wrestling mat it’s very quiet. The occasional low voice is heard as a trainer tapes up his fighters hands or the trainer massages his fighters arms/shoulders. There is a reverence there. The fighters don’t speak much as they are focusing their minds for the critical intensity necessary to enter the cage ready for anything that their opponent will throw their way. The Japanese word Dojo means “the place of the way” and were initially parts of temples. That carried over to the modern martial arts studio/Dojo and that temple like feeling is certainly there in the locker room and why I wasn’t my usual chatty self.

But it only took a few fighters to ask what I was up to and I had some volunteers for my project. Now unlike some of the events that I will be covering in After Action, the MMA fight could last a painful 3 rounds with each fighter totally exhausted and bloody, or it could end in 30 nearly sweatless seconds. No way to tell. A few of the fighters came back from the cage looking like they had done little more than jog to their car and back. That didn’t make for interesting photos. Then came Nick who went a very tough 3 rounds in the 185 pound match finally winning by knocking his opponent out via choke hold. This frame is the keeper of the evening! 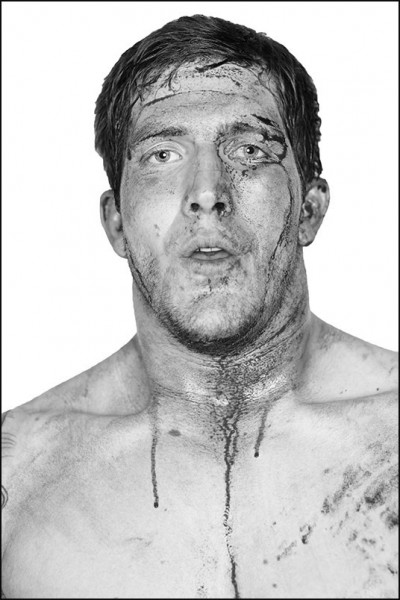 Oh and I asked the winner of the 125 pound womens title match, tough as nails and rather cute too!, what she got out of all the pain and personal sacrifice that it takes to be a fighter and she said “the satisfaction of accomplishment”. True dat!