I was reading one of my industry blogs the other day and there was a bit about essentially “How can you screw THAT up?” It was in the context of if you have all the gear you could want, as large a crew of top level assistants/wardrobe/hair-makeup/post-production professionals as you want, a bunch of stunningly gorgeous models and a week at an amazing and exotic locale … how can you not make photos that people want to look at? You have it all and frankly pretty easy to boot. Upon reading this commentary I thought, in the squeaky little kids voice of comedian Gabriel Iglacias, “Yeah!”

It’s not jealousy talking here at all. It’s just a statement of fact. Most of us professional photographers don’t get the breaks whereby we get paid big money to hire an army of people to make everything happen “just so”. Most of us have constant conversations with new and old clients alike where we have to say, often, “yeah but if that’s your budget for this project we are going to have to shave something off because we just can’t pull it off for that kind of money.” We have to think on our feet, adapt, improvise and overcome the various obstacles that come with every job that we do. The ones that can do the seemingly impossible stay in business far longer than those who can’t.

If you read the blogs of any solid working pro or watch enough BTS videos you quickly get the sense that not every photographer gets to have things go his way. That’s only in the movies ya know. But some of us have it worse than others and some are used to it more than the rest.

There is a particular kind of let down which occurs when you get to the location of your shoot and you realize that everything you had hoped to find to work with isn’t there. There are a million such scenarios: have to do portraits of a big leader of industry only to find a cube farm or at best yet another of the worlds most boring conference rooms to shoot him in. Or maybe it’s a supposedly big event that should provide lots of energy for exciting images but it turns out to be mostly old dudes sitting around on lawn chairs. Maybe it’s the performer that you admire and are supposed to get interesting and intense images of but the dude is too grumpy/tired/depressed/stoned to do more than slump into a chair. You know, that sort of thing. Hey it happens!

Well I had two of them go down last week but like the ninja that I tell myself that I am, I found a way to elevate the painfully boring to the level of “Hey! That’s not too darned bad!”. I take it in stride because that’s what I’m supposed to do. Failure is not an option. Ever. The best part is that after delivering the goods I got a note from each client to the extent of “Hey I know that conditions of the shoot didn’t turn out to be nearly as cool as we had hoped but you really shot the hell out of it and the images are great, thanks!” Now THAT is cool. Makes me fee all professional inside.

Here is a shot from a similar situation: I was to make photos of the head of a software company for a profile piece. Problem was, they had just moved into a new building that still had the old occupants logos everywhere,  everything was still in boxes, the head guy was only going to be in town for one day and had a ton of phone meetings lined up. I was given ten minutes between calls to make my shots. Luckily my subject turned out to be a super nice dude and was as accommodating as his schedule would allow. I shot the jebus out of it doing three set ups in that time and even with the cluttered mess about me made him look cool, intelligent, professional and personable.

My favorite was the last thing that I shot when he went back to his desk to answer the phone again. I saw the colors and reflections of the buildings outside and simply asked him to look up at me. Four frames later, the phone rang and that was the end of the shoot. 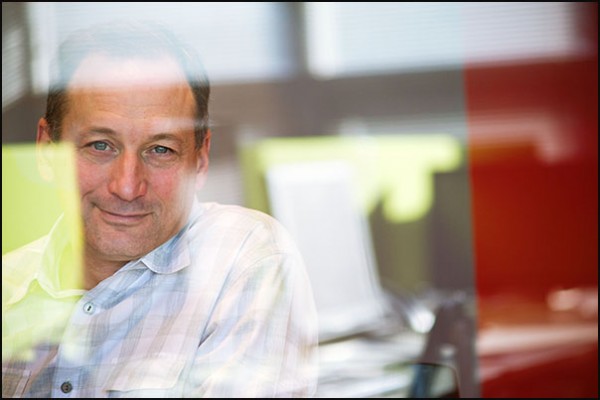 I’d love to be able to just connect the dots: this person here, light it this way, have all my trusty people do their magic and all that but I’m not sure that it would suit me. I’m not a huge fan of walking in an saying to muh-self “Argh! NOW what do I do?” but it makes me feel great when I pull off a magic trick and my clients know it.