It’s not what it seems …

I’m not a sports photographer. I’m just a photographer who likes to shoot sports. Wha? Yeah it has to do with that thing called “the score”. I don’t care who wins and many times the game winning hit, kick, basket, goal or what have you doesn’t happen in a very dramatic way. If it’s soccer, which I love, that game winning goal might happen early in the first half when neither of the teams thinks that much of it as there would be loads of time to catch up and flip the score. So even if you get an image of that quick shot which had little visually going for it, well, it’s not that much to look at. Many times the best and most interesting images that come from a sporting event have little to do with the final score. Instead they are found moments of motion or emotion. Those are the ones that I most dig.

I forget who said it but I was covering a golf tournament and was moving along with a few other press photogs and someone said, “It can be a lovely day, great weather, gorgeous backgrounds, nice light, good angles, perfect access and regardless of what moments we capture all we are going to bring back are photos of guys playing golf”. That really hit me. Except for a few publications who are dedicated to being visually important and are willing to explore the sporting world beyond “the game winning” image most publications who visually cover sports are doing so often want literal imagery. They want a photo of “Steve Bigun of The Flaming Bongos who clinched their win over The Blue Nothings” regardless of how boring it is. ArrrGH!

So like many photogs I make sure that I get the necessary action/winner shots but I try really hard to make the rest of my coverage more interesting than just “that”. But I’ll tell ya, if the sport doesn’t have a ball it is often very tough to make it interesting. For instance even worse than golf are foot races. I’ve covered the famous Bolder Boulder 10K race quite a few times and man-alive you bring back lots and lots of pictures of, uh, guys running. The trick is to have tricks and to dig deep to attempt to see something that isn’t that obvious.

So when I was assigned to cover the 5430 Triathlon I knew the pitfalls: running and cycling. Not bashing cycling at all, I was the captain of my cycling team, but guys on bikes are just as boring, if not more so, than running. I do think that swimming is fun to photograph because the water makes things interesting due to it’s non-linear and thus slightly chaotic nature. Thus, having shot this kind of thing before, I knew that the best opportunities for interesting images are during the start and transition from swim to land.

The light was less than amazing due to clouds on the horizon. I’ve shot this before with a glorious sunrise but not this time. But with the blue sky, everyone on black wetsuits and red caps it made for some interesting color. Shot this while the first wave contestants were getting final instructions. To me it’s largely a study in rhythm. 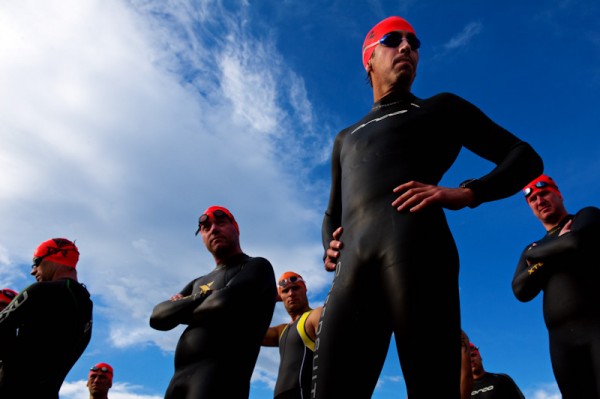 As they headed to the water I went onto the dock where they pass on the way to the open water and with the camera held with the grip up so as to get it as close to the water as possible I shot the next wave as they passed by. I had no way to see through the viewfinder but once you get to know your lenses and how focal lengths see, it’s not that hard to “blind” shoot and get pretty close to what you intend to capture. 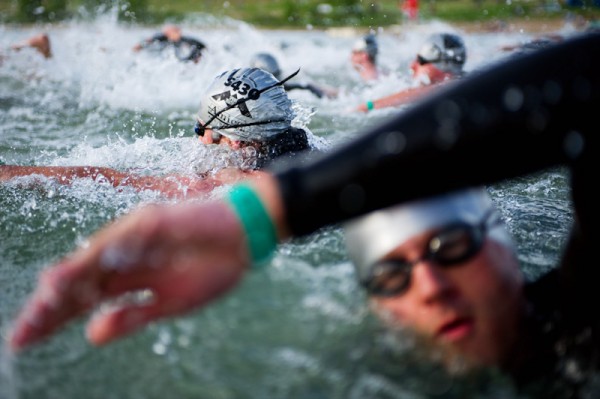 Earlier I set up a camera as a remote at the waters edge to get a low angle on the competitors as they left the water and got on land. To me this can be some of the more interesting images because they are on this course backlit and are dripping. The back lighting is a problem but just using regular fill flash doesn’t do the trick for two reasons: 1, your flash sync speed isn’t fast enough to prevent ghosting of the motion and 2) light on the camera isn’t interesting at all.

My solution was to mount the camera on a ground plate with a wide-ish lens and trigger the camera via my Pocket Wizard radio remote. I then hooked two of my Nikon SC-17 TTL sync cords together so that I could attach my SB-800 in high speed sync mode and not have that little delay that happens when you use the wireless TTL so that I could predict my moments more accurately. Using high speed sync eats up flash power so I used a Nikon SD-8a battery pack to reduce the recycle time down to about 1.5 seconds. This all enabled me to get 8-9 feet from the lens axis and produce a more dynamic and sculpted light on the wet motion. 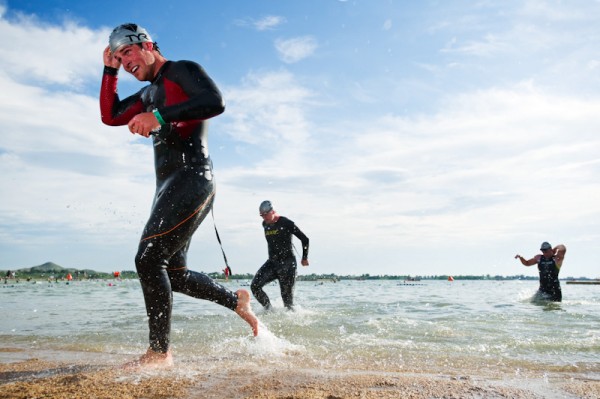 So even though I shoot sports to me it’s really just an excuse to try and photograph things in motion and if possible the emotive/evocative moments that surround the game.