I got a call the other day from someone who after seeing what I shot and how it ran in the publication that I was on assignment for the company wanted to purchase my images for their company’s new marketing campaign. Sweet! I love calls like that. So I go to my archive and pull the images.

And that got me thinking, “I wonder how many images I shot last year?” So I did a search in my archive and found that I made just a smidge over 95,000 images in 2012. I kinda fell out of my comfy chair with that number. I knew that I’ve been busy but she-Zam! For us old fellers that equates to something like 2650 roll of that film stuff you hear about in history class. The funny thing is that despite how busy I’ve been I don’t shoot as much as I used to with some things.

Seeing as I came from a sort of fine art photo background I used to shoot just about everything that I saw that was interesting. I found that for quite some time I was that annoying dude who not only caries his camera everywhere but was constantly pointing my fool lens at everything and clicking away when I should have been doing something else, like talking to the people at the party that I was attending. Yeah, that guy. My motivation was simple: I had to shoot what inspired me and frankly a large part, if not all, of the world is rather inspirational.
But many years ago I was on a road trip with my then girlfriend and near the end of a long and very tiring day behind the wheel I pulled the truck to the side of the road and hopped out to grab my camera. Reason being: sunset over the desert in Utah. As I was lining up my shot she quietly said, “You know, you don’t have to photograph every damned sunset you see. Try just looking at it without having to document it”. So I left the camera on its tripod and stood beside her watching one of the most glorious sunsets of my life. That moment and the insight that created it changed me.
About that time I was morphing from a guy who was obsessed with photography to a guy who was an actual professional photographer. I was a budding freelance photojournalist and constantly either on the prowl for saleable images or on assignment for a client. I essentially stopped shooting random stuff. My lens had a purpose: publication and from that my livelihood and the furthering of my carrier. I didn’t shoot for myself anymore; I shot for others.

Big change. Because in the past I only shot to please my eye. I spent loads of time in the darkroom perfecting my developing and printing techniques. I made sizable gallery prints that I hung on my walls. I made loads of photos of my friends and the things that I found beautiful just for the sake of making the images. That all came to an end.
A part of this was that I had become, pardon the pun: focused. If I wasn’t on assignment I was working on a project that I was going to turn into an assignment. I had had enough portfolio reviews where the editor would ask me about personal projects and I told them that what I show is what I do: what you can expect me to be able to bring back from an assignment of reasonable scope. I didn’t spend endless hours and personal money to make images that could not likely be made on assignment just to show what I can do in a perfect world. My folio was then and will always be a reflection of who I am as an artist when I’m under pressure. If a persons’ character is shown in tough times then to me a professional’s folio should be a reflection of their professional character and not a series of “best case scenarios”.

I thought that the image or story was good enough to shoot on my time it should be good enough to pitch to a client. Thus my projects turn into assignments and can find their way into my folio if they are good enough.

But they don’t go on my wall. I don’t need to look at them after I’m done with them. It’s the image that I haven’t shot yet that most captures my imagination. Blah-blah-blah. But it’s how I feel.
Until recently. When I got my first modern smartphone a few years ago, my beloved Nexus One, it had a usable snapshot camera in it and I saw its usefulness in being a sketch pad. I made a lot of funky still life images with it, usually while my wife was trying on some outfit in the stores dressing room, and it became both a way to keep my busy mind occupied as well as an exercise in patience because the cameras in phones are so limited. It was good for me.

Made a little book from the images that I gave to some people. Was cool.

Now I’m thinking that I need to take my loose creative approach to the images that I make and go back to the beginning: see, feel, shoot, show. With no expectation of compensation. Just for me and all that.

Only I don’t have a wall of images to fill, I have the boundless glory of the web. You poor suckers! Thus I’m going to put up an Instagram feed of my visual musings. Things that I find interesting but have no commercial/publication value. Art-ish for art-ish sake. I have no idea where this will go or more importantly where it will take the inner me but I figure, why not?
Isn’t risk a critical part of being a so called artist?

Which brings me to this shot. I did images for a story about a very forward thinking project going on in Fort Collins Colorado. A developer is essentially building a 300 acre village in the city where it will be not only mixed use but have two working farms that supply the community with food including livestock. The land consists of two farms that are historic sites so they have to repurpose the original buildings which are hauntingly beautiful in their old weathered way. The whole scene that day was practically devoid of color so I processed the images both in color, as the client was expecting, but also as a warn tone B&W as I was seeing while I was shooting them. For some reason there is an Andrew Wyeth quality about this that I dig. 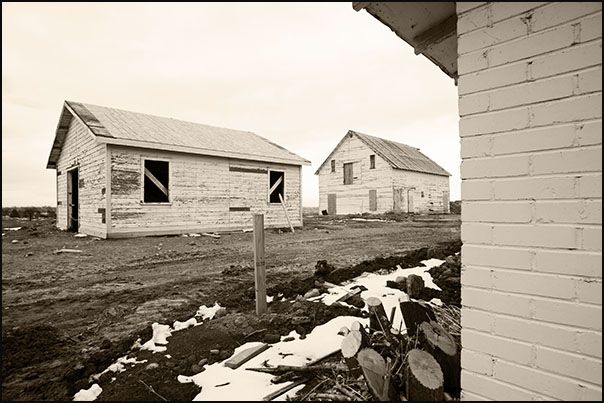